So today ended up being a rather interesting day. I managed to get an invite to the Google Glass Explorer program thanks a friend and I spent the day getting to know the device. In fact I would imagine that this is the beginning of what will be a series of posts talking about Glass, and hopefully a few of them will be about some APKs I'm going to attempt to build and side load into it. So what are my first impressions?

It's exciting. Walking through this thing is like entering a new world. The gesturing between tiles, the use of the interface feels normal, but it's one of those things where you are keenly aware that you are doing something that is vastly different than the norm. After that feeling fades one starts to attempt to get used to what they should and shouldn't use it for. Through out the day today I answered a couple of phone calls with Glass, read the gist of a few emails, and shared a couple of photos. I haven't yet attempted a video call with it yet, but that is certainly on my to do list. I have to say I'm pleasantly surprised thus far with the audio quality on the bone vibration tech, but I will certainly also mess around with the ear bud a little later. Below I've put an image I took with the camera, and a viginette I took to show the music APK in action: 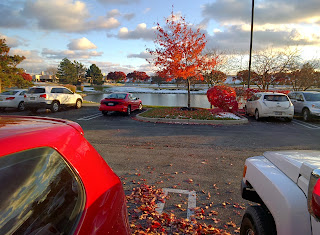 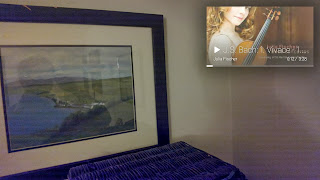 As you can see the camera isn't too bad. It does get a little grainy in lower light scenarios, like the on the second photo there. But thus far I'm happy enough with it. I'll have to take a collection of shots in different conditions to get a true judgement.

As implied I also messed around with the new Music apk. Apparently there is now a Google Music APK floating around that you can load using adb in order to get the streaming service onto glass (instructions can be found here: http://phandroid.com/2013/11/11/google-play-music-google-glass/ and instructions on how to do the adb/debugging part can be found here: http://glassdev.blogspot.com/). I've played around with it a bit and have found the audio quality to be adequate though nothing to write home about. I still need to test with the ear buds however, which I imagine will give improvement.

Lastly, the Google Now integration is perhaps the coolest part. It takes the tiles that you are used to on your Android phone and makes some of that information available to you on glass. Here is an example of what one of those looks like: 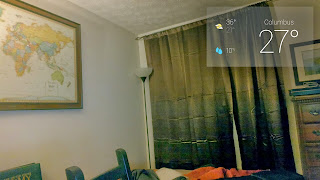 There is clearly a lot of exploring I have to do. I'll definitely be writing up some more posts as I get a better impression on the device and/or start building something interesting to play with on it.