Thoughts on the HP touchpad

Now I was not one of the lucky few that had caught the Touchpad when it went for 99 dollars a while back. However, I did notice fairly recently that Newegg had it refurbished for 230 (it's now a bit more expensive) (link), which really isn't bad. I ended up purchasing this tablet, mostly as a toy that I could fool around with as I wanted to installed ICS on it. As it turns out Cyanogen Mod 9 is out for it and in alpha (now officially). So, I figured I'd share a couple tips with anyone else brave enough to make this purchase and to share some opinion of its performance.


Out of the box it had WebOS installed. Having not used a device with this operating system I was actually impressed by the UI and in particular how it handled switching between running applications with its card system. The problem with it, as has been addressed by many bloggers is the complete lack of applications for it. This is a large reason why I decided to go ahead and install android next it in a dual boot fashion, as WebOS would stand as an OS I could use if I blow Android up playing with it.

The installation of Cyanogen 9 is actually pretty easy. You can follow the instructions found here. After the installation I was surprised to find that despite being in Alpha the OS ran rather well. The camera is still inoperative and there are some buggy situations you'll run into, but overall I found the tablet tolerable to use in this scenario as a normal driver. I did however run into a couple problems that required some digging around the internet to solve.

The biggest problem turned out to be charging at first. I ran into a situation where the tablet would not charge unless it was booted into WebOS. The behavior was obviously software related and so the search for a solution began. I ended up finding out that the storage options needed to be changed in order for the current build of CM 9 to charge inside android. So I went to the Settings application, then to the button on the top right for more options and hit USB computer connection. There one needs to set the device to MTP mode. The other benefit to this change is that it should let you mount the device in windows as well for getting at the internal SD card storage. The moment I made this change the behavior improved and I can now charge the device (hooray!). 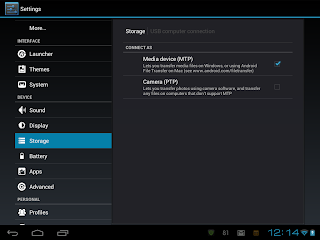 Outside of that charging issue I've had a true pleasure in playing with the device. The interface is fast, and ICS is a huge improvement over earlier versions of Android. The tablet has been excellent in use for email, Teamviewer (IT type stuff), Social networks, Netflix, and really all any other tasks that you'd also complete with a smart phone. The device does feel a bit heavy, and the sleeve it comes with from Newegg is mediocre. I definitely suggest getting the HP made case for it, and if you feel like springing for it the touchstone charger as both enhance the ownership experience quite a bit. In any event if you are looking for a fairly cheap tablet with decent specs its not a bad choice if you're willing to get your hands dirty.